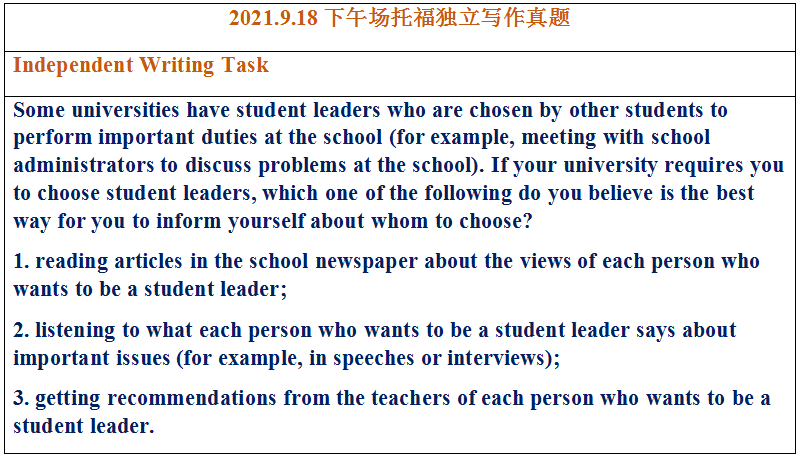 Choosing the president of the student union is of vital importance each semester. Among ways to know about those students candidates, I believe listening to candidates’ interviews or speeches is the best one when compared with newspaper comments and teachers’ recommendations.

First of all,  it is a very direct means to understand what belief those potential leaders hold and what measures they will take in the near future through listening to their speeches or watching their interviews. Let’s draw an analogy between choosing student leaders and choosing national leaders. Both campaigns involve speeches, and the election procedures are very similar. Since most of the public agree that listening to election promises is an effective way to help determine who is the next president, I am fully convinced that we can apply the same method to the student union. In addition, speeches or interviews are given openly by those student candidates, which can be regarded as first-hand materials to some extent for us to gain a deep insight of those people. Based on such first-hand materials, we can make a critically comprehensive and accurate judgement.

However, reading articles on newspaper is equal to receiving opinions from the third party, which means sometimes it is not objective since those editors may form a biased view, either out of prejudice or under the influence of the candidates’ manipulation, and write editorials in a misleading way. As a result, I doubt the justification of those articles. Likewise, teachers' recommendation might be incomplete as well. As we all know, it is a tradition for students to behave well in front of teachers since winning the favor of teachers can benefit students a lot, such as more detailed education and more individual care. Accordingly, most students will try to respect teachers, finish assignments timely, and become actively involved in class. Nevertheless, such positive image may just be a small part of those candidates, students who have defects such as procrastination and arrogance but choose to hide them. Thus, teachers may also be deceived by those students who want to be student leaders.

To sum up, the best way to inform us of those students who want to be leaders is to analyze their speeches or interviews directly.